WIFTA’s leadership is committed to recognizing and addressing our own historical shortcomings.

We are dedicated to creating and enforcing policies that require leadership and members be educated on inclusivity and putting that knowledge into practice. 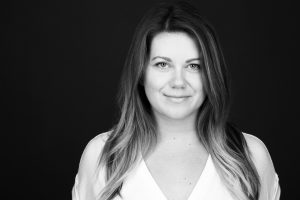 Marie-France Guerrette began her career on television at age 14 as the co-host of a kids show on Radio-Canada Télévision. Since then, she’s been the director, senior producer and executive producer of several nationally broadcast programs and TV series. Her rich, extensive experience enables her to manage all aspects of a major production.

Her goal as a producer and director within the documentary and unscripted genre is to explore personal stories that reveal human vulnerability and encourage viewers to see the world around them in a different light. Her passion for the human experience and existential questions is at the heart of her artistic process, a process that’s fuelled by the desire to understand who we are and why we do what we do.

In 2015, after 3 years as Senior Producer at the CBC, Marie-France co-founded an independent production company, Productions Loft Inc., through which she’s produced and directed many documentaries that have been broadcast world-wide. She has received numerous awards, including a prestigious Golden Sheaf Award in the Documentary Arts & Culture category. She has also been nominated for Best Director at the Alberta Film and Television Awards multiple times.

Described by iconic actor Bruce Dern as “a one-woman studio – never seen anything like it,” Katrina Beatty is a Producer and Director based out of Edmonton, Alberta. She works in varying formats including short and feature films, web series, music videos and commercials.

Notably, Katrina’s work in feature films lead her to partner with Rocky Mountain Pictures and Panacea Entertainment to produce the made-for-TV movie I THINK I DO. The film starred Mia Kirshner (THE L WORD, THE BLACK DAHLIA), garnering her a Canadian Screen Award nomination for her performance. The film premiered on the Lifetime Network to the highest ratings of all Valentine’s programming on the network that day. It is regularly broadcast on The W Network in Canada and has been sold all over the world.

Currently her production company Loud Whisper Productions is producing the Telefilm funded feature film BEFORE I CHANGED MY MIND slated for production in Summer 2021. At the Sundance Film Festival in 2020, the script was announced to the GLAAD List; a curated list of the most promising unmade LGBTQ-inclusive scripts in Hollywood.

Barb started her career in television with a part time job in Master Control in a local television station.  From there she worked in many of the different technical positions in the station and then moved over to a segment producer on the local morning show.  During this time, Barb produced a variety of lifestyle content, live in studio or on remote.  Television also offered the opportunity to travel and produce content from places as far north as Tuktoyaktuk to as far south as Honduras.  This was a great job!  But after a round of layoffs, Barb decided to try her hand at freelance work.

Barb currently works as a 2nd AD on films in Western Canada and she still works on a variety live events for sports broadcasters.

Tiffany Cowan is an industry award-winning freelance coordinator.  After graduating from NAIT’s Radio and Television Program in 2011, she started her career in the Production Office and has worked on film and television projects in Edmonton and area ever since.  Her production credits include feature films (Cutbank, They Who Surround Us), episodic television (Blackstone, Tiny Plastic Men) and reality and documentary works (Mom’s A Medium, Re-ken-si-le-a-shen). Tiffany currently serves on the board of directors for WIFT Alberta (Women in Film and Television – Alberta) and is a guest instructor at GIFT (Girls in Film and Television) sharing her knowledge with the future of young women in the screen industry.  As a driven and hard-working mother of two young children, Tiffany is learning to find balance between the two very demanding roles. She believes that supporting other women will, in turn, make the struggle between a fulfilling career and raising a family a little easier for everyone.

Born and raised in Alberta, Jenn Repp is an Indie Filmmaker who is passionate about storytelling. Although the pandemic has brought new challenges, Jenn has found opportunity to connect with filmmakers near and far using online platforms.

Jenn began working in film in 2016 as a PA and background actor. She worked her way up learning as much as possible by doing.  Jenn soon found success as she stepped into leadership roles. The first feature film she produced called “What We Don’t Say” in 2019 managed to snag her a nomination for the ‘RBC Emerging Artists Award” at the Calgary International Film Festival. The film also won “Best of Fest” at the Full Bloom Film Festival in North Carolina; and “Best International Feature” at the Fort Worth Indie Showcase in Texas. In the summer of 2020, she produced a short film called “Birthday Cake” which won the “Spirit of Edmonton” award at the Gotta Minute Film Festival.

Now, with three feature films in post-production and nearing completion, Jenn has recently relocated to Calgary and continues to reach new heights, strives to create compelling art, and advocate for women in film.

WIFT Alberta is a chapter of WIFT, an organization that started in 1973 in Los Angeles, California, by a group of women in the film industry who were determined to improve opportunities for women in all key roles, including producers, directors, writers, actors, crew, distributors and all multi-media support roles.  More than 50 chapters now operate worldwide, including 6 in Canada. Every two years, a chapter of WIFT hosts an international summit to further cooperation between women professionals on a global level, and to identify key issues affecting women today.

WIFTA’s leadership is committed to recognizing and addressing our own historical shortcomings so that negative behaviours are not supported or continued. We are dedicated to creating and enforcing strict policies that require leadership and members be educated on inclusivity and held accountable for shortcomings.

Be the first to know about key dates, upcoming events, and our latest news. Stay inspired and keep connected with updates right to your inbox.

We are grateful for the support we have received from the Canada Media Fund, Edmonton Arts Council, and Alberta Culture, Multiculturalism, and Status of Women.